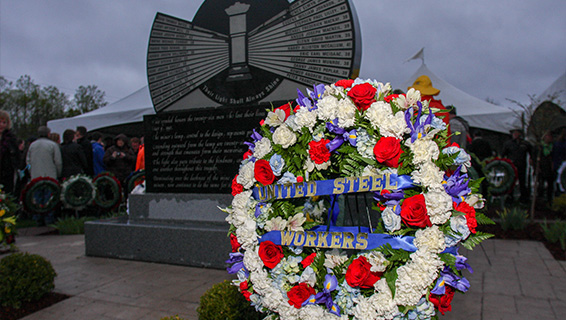 Despite the power of the Criminal Code of Canada to hold corporations, their directors and executives criminally accountable for the health and safety of workers, as of early 2022, there have been only nine successful prosecutions under the Westray amendments – four in Quebec, four in Ontario and one in British Columbia. Those prosecutions resulted in the conviction of seven corporations and two individuals. Sentences have been
relatively minor.

If people where held criminally accountable for their negligence, it would deter others from callously endangering the lives of workers.

Our campaign has four asks of our provincial/territorial government:

Led by the United Steelworkers, the campaign has support from towns and cities from across the country, law enforcement officials and professional associations.

Put your community on the map

Lobby your local town or city to endorse the campaign. If your town or city has not endorsed, we want to help you make that happen. Contact us if you are interested and we can help you approach your city hall with a resolution to support. It is easier than it sounds. Every town that a volunteer has approached with the campaign has endorsed. No one wants to see people killed on the job in their community.

Over 50 cities and towns across Canada are endorsed the Stop the Killing campaign: including Plymouth, Nova Soctia to Edmonton, Alberta to Burns Lake British Colombia to Toronto, Ontario. Our campaign is creating concensus at the local level to pressure governments, labour officials and law enforcement to investigate workplace deaths and injuries to press charges if there is evidence of criminal negligence.

Read the resolution city councils are passing to enforce the Westray Amendments to the Criminal Code of Canada.

Read copies of the endorsements from municipalities across Canada, to Stop the Killing and Enforce the Law.

Corporate Criminal Liability 2004-2022: A review of legal cases since the enactment of the Westray amendments to the Criminal Code of Canada.

May 9, 2017, marked 25 years since the Westray disaster and the USW, along with family members, elected officials and other unions gathered to commemorate the tragedy and continue the campaign to enforce the law.

Hell’s History, by former The Tyee journalist, Tom Sandborn, is an in-depth publication on the USW’s fight to prevent workplace deaths and injuries from the 1992 Westray mine disaster through 2016.

A collection of news clippings related to the USW’s Stop the Killing, Enforce the Law campaign.

Learn more
More than 1,000 workers each year are killed at work, but police and prosecutors are not utilizing the Westray amendments that hold corporations, their directors and executives criminally accountable for the health and safety of workers.
Act Now