USW Local Union 9329 represents the service workers and registered nurses of a long-term care home in a rural area of Ontario. President of the local for the last three years, Lisa Cook, nominated her local’s health care units for the 2021 Jefferson Awards because of the incredible compassion and strength the members showed during two serious Covid-19 outbreaks at the CV Homes facility they work at. Because of the sacrifices these members made in order to save lives, stop the spread, and support lonely residents isolated from the world, Local Union 9329 is District 6’s 2021 USW Cares Jefferson Award winner.

The care home Local 9329 members work at was the first facility in the region to have a Covid outbreak. “It was a scary time because it affected lots of families: people’s spouses and kids lost their jobs and were sent home from their work; some of our members were down to one income and everybody still stepped up,” said Cook.

Because members working at the care home are constantly exposed to the virus and risked spreading it, the family members they lived with were let go and weren’t allowed to go to work. In order to keep their families safe and allow for their partners to continue working, some members moved in together and shared accommodations.

“We didn’t have any option. Even my own two children, they were both sent home from their jobs the day it was announced that the nursing home had an outbreak, so they immediately became unemployed,” said Cook.

“Family and friends didn’t want to be around us, because we were right in the middle of it and there were so many unknowns when it first came out. Obviously we’ve learned a lot since then, but nobody knew if it was safe to leave our work and go to the grocery store in scrubs.

“People in scrubs were frowned upon almost. We were heroes because we were doing it, but to go out in the community with your scrubs on, people were fearful of you because they didn’t know if you were spreading the virus.”

The nursing home lost a quarter of their resident population to Covid, and twenty-nine out of 110 staff tested positive for the virus. One staff member was hospitalized and put on a ventilator. Most of the staff members who tested positive still have long-term effects, like heart palpitations and trouble breathing, to this day.

During the outbreaks it was all-hands-on-deck for these members. It didn’t matter which department someone worked in, everybody helped everywhere. Staff who worked in Dietary would help with lifts or changing residents, because so many people were off sick.

“We were a team. We came together to provide the best care we possibly could with so many staff off. Nurses worked sixteen hour shifts fourteen days in a row. People came in whenever they could to help and wore full-gown PPE to try to protect themselves,” explained Cook. 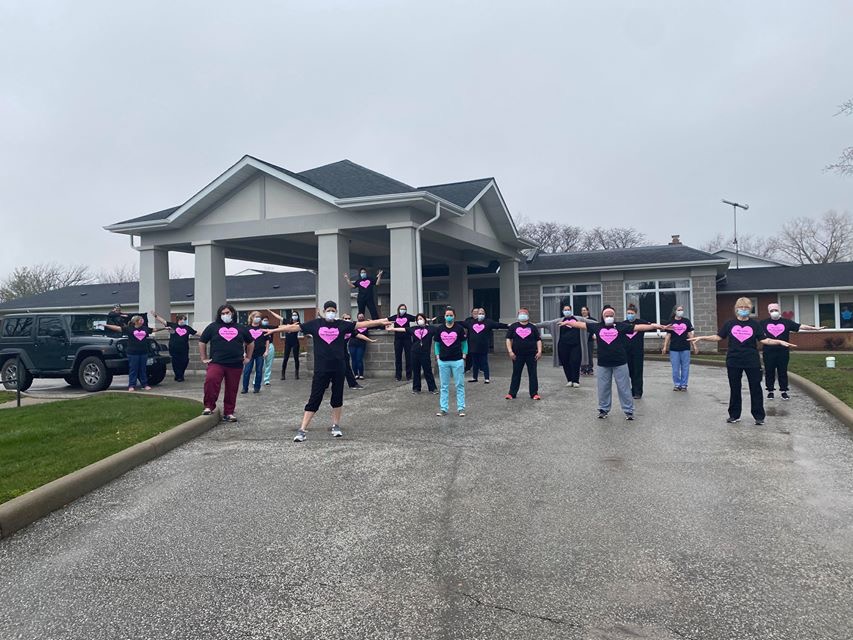