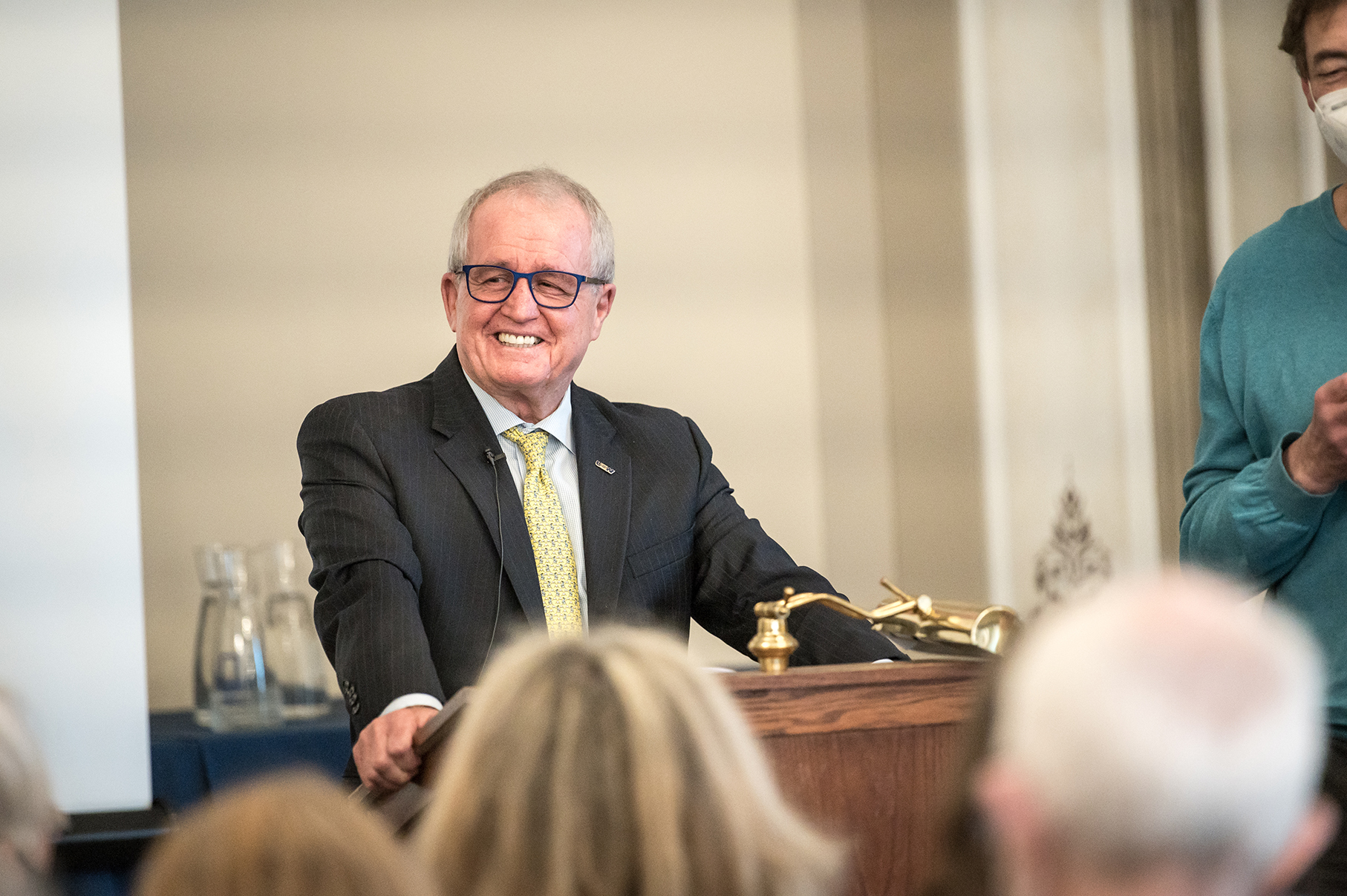 Image: Ken Neumann is the 2022 recipient of the Sefton-Williams Award, bestowed to Canadian activists and leaders who have made significant contributions to the fields of labour relations and human rights.

It was during his term as USW National Director that Neumann also made his mark internationally, through a commitment to building global labour solidarity and fighting for greater equality and social justice around the world.Over a five-decade career of trade union activism, culminated by 18 years as United Steelworkers union (USW) National Director for Canada, Ken Neumann earned a reputation as one of Canada’s pre-eminent labour leaders.

Neumann’s legacy has been recognized with his selection as the 2022 recipient of the prestigious Sefton-Williams Award, bestowed to Canadian activists and leaders who have made significant contributions to the fields of labour relations and human rights.

Presented by the University of Toronto’s Woodsworth College and the Centre for Industrial Relations And Human Resources, the Sefton-Williams Award is named in memory of two former USW leaders – Lynn Williams (International President 1983-93) and Larry Sefton (District 6 Director, 1953-73).

Neumann, who retired in March of this year, received the award at a ceremony at the University of Toronto on April 21, during which he also delivered the Sefton-Williams Memorial Lecture, entitled International Unionism in a Globalized Economy.

“Today, I want to talk to you about one of the main accomplishments of my career – the work of our union in building international worker solidarity and how essential that is in the face of globalization and ever-more powerful multinational corporations,” Neumann told friends and colleagues in attendance.

Those promoting the corporate, neo-liberal agenda have long predicted that globalization of capital and corporate trade agreements would create greater working-class prosperity. Instead, the result has been increasing inequality and concentration of economic power around the world, as well as a rise of extreme right-wing movements and politics, Neumann said.

“I truly believe that the only way we can counter these phenomena is through international trade unionism and true, worker-centred economic populism,” he said.

To combat the misery caused by globalization, the USW led the way in building international labour and social justice alliances, beginning with the Steelworkers Humanity Fund (SHF), created in 1985, said Neumann, who served 18 years as the Fund’s President.

Under Neumann’s leadership the SHF expanded the scope of its work, building partnerships with an increasing number of labour, community and civil society allies around the world, helping countless workers and supporting communities on every continent.

Neumann also played a leading role in the USW’s successful efforts to expand international union federations and alliances, representing millions of workers on every continent. The full weight of such global alliances has been brought to bear in support of some of the world’s most exploited workers, he noted.

A prime example came following the Rana Plaza disaster in Bangladesh in April 2013, when the collapse of a multi-storey garment factory killed more than 1,100 workers and injured thousands of others. The large majority of victims were women, working in some of the lowest-paid and poorest conditions in the world, to produce clothing for some of the world’s best-known and wealthiest brands, including Canadian companies.

Neumann visited Bangladesh on the first anniversary of the disaster, in 2014. Even now, recounting the experience remains emotionally challenging, he acknowledged, pausing to maintain his composure as he described witnessing first-hand the impact of the deaths and suffering.

“I must say I wasn’t prepared for what I saw and experienced in Bangladesh. It was one of those moments that shake you to your core and change you forever.”

Neumann, USW and much of the global labour movement committed to a relentless struggle to improve conditions with and for garment workers in Bangladesh. USW and its allies worked closely with the Bangladesh Center for Worker Solidarity and ultimately succeeded in pressuring many major clothing brands to accept the ground-breaking and legally binding Bangladesh Accord on Building and Fire Safety.

“The result has been remarkable. Factories in Bangladesh are much, much safer from a structural and fire safety point of view,” Neumann said.

Still, garment workers in Bangladesh and elsewhere continue to be exploited, and the international labour movement will continue its efforts to press for greater reforms, he added.

Expanding labour solidarity around the world remains essential to achieving economic and political changes needed to reverse the destructiveness of corporate-led globalization, he said.

“Working-class struggle is not, and should not be, bound by international borders. Workers around the world have more in common with each other than they do with the bosses, no matter where they might live.

“I know that this fight will go on, not only by our union, but by unions around the world, in every sector of the economy.”

Find out more about USW’s campaign to support garment workers in Bangladesh in winning better conditions.