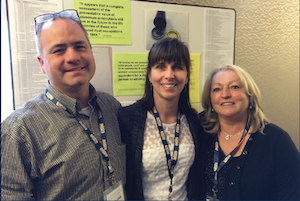 A decade-long campaign led by the daughter of a deceased uranium miner has led to victory for workers struck by Parkinson’s disease after being subjected to aluminum dust inhalation “treatments” in their jobs.

Supported by her union, the USW, and other worker advocacy organizations, Janice Martell’s relentless campaign has finally achieved its goal.

In February, the Ontario government announced Ontario’s Workplace Safety and Insurance Board (WSIB) will recognize Parkinson’s as an occupational disease linked to the use of McIntyre Powder in mining and other industries, and award compensation to former workers and surviving family members.

McIntyre Powder was an aluminum-based inhalant used between 1943 and 1979 where workers might be exposed to silica dust. The theory, eventually proven false, was that inhaling the powder would protect workers’ lungs. Instead, it made workers sick, and led to many deaths.

Martell’s father, Jim Hobbs, developed Parkinson’s after being subjected to the “treatments” while working at a uranium mine in Elliot Lake, Ont. Martell founded the McIntyre Powder Project and spent years trying to help her father secure workers’ compensation benefits, without success.

“My dad did not live to see this day, but it is a fitting legacy to a man who always enjoyed ‘breaking the trail’ during our winter walks, because he wanted to make the path easier for those behind him,”
Martell said.

The USW partnered with the Occupational Health Clinics for Ontario Workers (OHCOW) to seek out workers and families through “intake clinics” in Northern Ontario in 2016, which helped to confirm high rates of Parkinson’s and other diseases among the miners.

“This is a major victory for these miners and their families. It is the first time since 1994 that an occupational disease has been added to the WSIB’s presumptive schedules of recognized diseases,” said Myles Sullivan, now the USW’s Ontario Director.

Security guards working at Vale’s mining operations in Sudbury are now Steelworkers, after voting overwhelmingly to join the USW.

On the morning of October 4, a sacred fire will be lit to honour and remember missing and murdered Indigenous women and girls. This fire will burn in Sault Ste Marie, Ontario during the third USW National Gathering for Indigenous Steelworkers, held October 5-6 in that community. The USW National Aboriginal Committee thanks Firekeeper Mishomis […]

“Canada has long been a world leader in the peaceful use of nuclear energy, thanks to the hard work and dedication of our members at Canadian Nuclear Laboratories."